This week has started off great. Last week wasn’t so great as I basically got sick on Christmas Eve and only just got better thanks to a dose of antibiotics. I was annoyed as I was meant to start my marathon training from 1 Jan so missed a couple of runs. I went for my first 2015 run at the weekend and I ran with a friend which was great. I’ve always been a bit of a loner when it comes to running – i used to run with a great bunch of friends a year or two ago at the weekends but most of my runs were on my own so it was nice to have company with my lovely friend. It was a hot one and we took it nice and slowly and chatted all the way round and I remembered how great it is to have a running buddy. It makes the run much more interesting and the pain doesn’t seem as bad 🙂 So I’m looking forward to going out with her again hopefully next weekend. 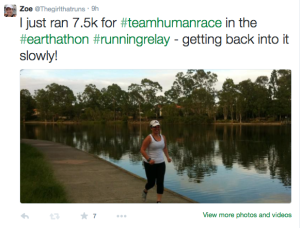 Earthathon On another note one of my Twitter buddies encouraged me to join her team for Earthalon. If you haven’t heard of it basically it’s a challenge whereby you basically sign up and join a team online and the aim is for you to do an equivalent lap of the earth in miles/km as a team. Each time you run you hash tag #earthalon and your team name (see photo) – the team I joined is #teamhumanrace and it’s been really fun so far as you have people all around the world encouraging you in your runs and you get the chance to see other peoples journeys too which is awesome. Anyway hope you are having a great week of training!

2 thoughts on “A reason to run – buddies and Earthalon @earthalon”