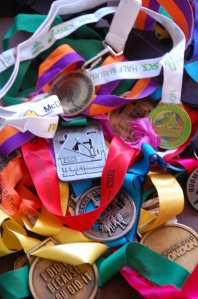 This page is a work in progress. I am trying to remember all the races I have done and list them along with times if I can find the details..

Bridge to Brisbane (for fun) 56 mins- see my race recap

Park Run 5k (January) – 25 mins something. Was a hot day and first race back after holidays so I wasn’t expecting great times!

Ipswich Park2Park – very hilly but enjoyable course. Time was 25.35 – came in as 28th woman and 4th for my age group.

This was the year my poor husband to be saw me stagger over the finish line, directed me to the nearest toilet and I was ill. He made me promise after that no more full marathons!

Leicester Half Marathon (21k) – in the days when this race started at Mallory Park. I enjoyed this race – it was a bit chilly from what I can remember though – so it was beany and gloves time.

British 10k, London – can’t remember time but I know this year it was a hot year and both my friend and I struggled to push through but I think I did a reasonable time.

Newark Half Marathon – my time on this was approx 2hr15 – it was a heatwave and the race didn’t start until something stupid like 11am and as I was running round I watched in horror as people passed out, threw up and pulled out of the race. I crawled round and finished but with a bit of heat exhaustion vowing never to do it again!

First and best marathon from enjoyment point of view. The crowds were awesome, the people that helped me train were awesome – I was on a high after this race although couldn’t walk properly for a week, having to walk down the stairs backwards!

Dublin Marathon (42k)– best not to say as it was a long time (over 5 hours – had to walk part of it as had injury – stupid me kept going!)

Race for life 5k – not sure of time

Kingston 16 (25k), London – can’t remember time but I think it was a reasonable one

Flora 5k – not sure of time

The Great North Run Half Marathon (21k)– 2 hr 20 – First Half Marathon and was overly cautious as people had said it was hilly, got to end and felt I could keep going which tells me I could have gone much faster!!

British 10k, London – not sure of time

Nike 10k, London – not sure of time but I remember this was my first race and where I had a nightmare with my shoes and clothing.

2 thoughts on “My Races”